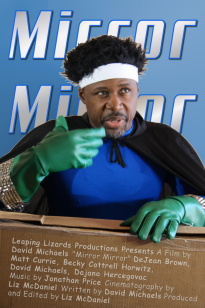 Synopsis: A second-rate aspiring super villain gives up world domination and finds true love instead, thanks to his magic talking mirror.

Behind-the-Scenes: This was the second film I ever directed.

After producing “God Help Our Angels,” the producer wanted to do another short film with me. We wanted to try a special effect we’d seen in a video online, where a character looked at himself in a mirror, but suddenly, his reflection did something different. So I created “Dr. Devastation” and his magic talking mirror — which turned out to be much harder to produce than we expected.

In the script I had a single actor holding a two-way conversation with his own reflection. Each side had to be filmed separately (the “real” person and the “reflection” alter-ego), but accurately timing the pauses between each chunk of dialog proved difficult. We tried having someone read the other half of the conversation’s lines off-camera, but inevitably, their timing was unavoidably different than the actor’s. We even tried having the actor record his other half of the dialog, load it onto an mp3 player, and attached a hidden earpiece into his ear that faced away from the camera. But every time he moved his head, the wire got revealed. Eventually, we “saved” the film in editing. We just cut back and forth, went to single-person close ups, and used other tricks to fix the timing issues and make it all seem to flow naturally and smoothly in the finished film.

In addition to those technical challenges (which we, as beginning filmmakers, had to figure out on our own as we went), we also had a super-skeleton crew. I wasn’t just the writer-director. Most days, I also slated the shots and held the boom mic during takes while the editor-producer operated the camera — all while the single actor interacted with and responded to no one, pretending to hear his other half of the conversation that we hadn’t even recorded yet. That was it. Three of us, trying to do a complicated VFX-based scene, learning as we went.

On the bigger production day, the entire film crew — friends from work and/or film school — doubled as background actors in the middle and final scenes of the film. Dr. Devastation’s girlfriend in the final scene was also a first-time actor, who just wanted to help out.

But in the end, it was totally worth it. We made a funny film — one that reached farther than we ever expected. Years later, after moving to a different state, DeJean (the lead actor) was at the gym when somebody recognized him as Dr. Devastation from “Mirror Mirror.” And a couple years after that, Dr. Devastation’s story would continue in a new short film — with a much larger cast and significantly higher production value — called “Villains Anonymous.”

You never know where something’s gonna lead. And this all started because we wanted to do another film together, and try out a cool visual effect we saw in a video online somewhere.

[Spirituality] Who or What Decides When It’s Your Time to Die?